Note: this post was inspired by the article “Dungeons and Dragons creatures, generated by neural network”, wherein a savvy artificial intelligence wizard Janelle Shane trained a neural network to come up with a slew of new creature names based on 2nd edition AD&D creature names. I found these names inspiring and decided to render these creations storied and statted - hence, this post. Enjoy - use in your game, modify as necessary, and please let me know in the comments if you love/hate/have recommendations :) cheers! 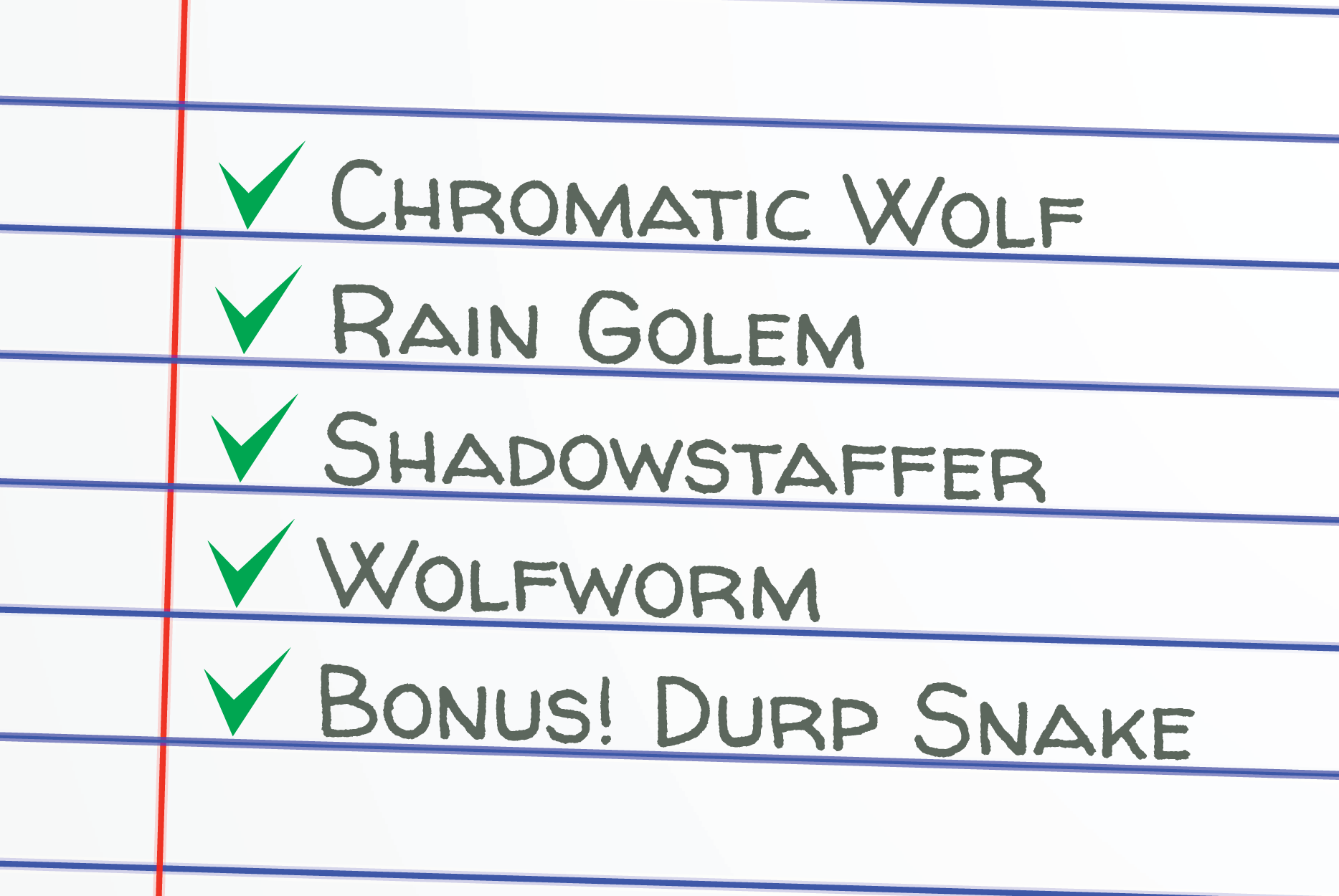 The Wizard Janelle-shaen, Superior Mage of Caslin, is the creator of a mobile tower which is host to an array of strange spells and beasts - this tome contains the details of a small few of the known creatures encountered in her tower of wonders.

Very little is known about her mobile tower, other that inside of it, there is rumored to be endless experimentation in a wide array of arcane tricks. Most adventurers who have attempted to enter to investigate have met their doom, or returned with stories of failed attempts against her beasts and magic.

The chromatic wolf is a rare beast, initially created to protect a wizard’s tower, but legend has it that some were let free into the wild by a powerful Druid who learned of their forced captivity and would not stand for it.

Unlike the common wolf, the chromatic wolf is a solitary creature. However, when many are put together against their will, they will fall back into to pack tactics.

A chromatic wolf has been removed too far genetically to reproduce with the common wolf, and will only breed in captivity.

A chromatic wolf will try its best not to be seen and surprise a group of adventurers with its breath weapon before leaping upon them. They are aware of the fact that their breath weapon has potential to do extra damage, but they do not rely on such luck in combat.

Keen Hearing and Smell. The wolf has advantage on Wisdom (Perception) checks that rely on hearing or smell.

Pack Tactics. The wolf has advantage on an attack roll against a creature if at least one of the wolf’s allies is within 5 feet of the creature and the ally isn’t incapacitated.

Bite. Melee Weapon Attack: +6 to hit, reach 5ft., one target. Hit: 13 (2d6 +4) piercing damage. The target must succeed on a DC 14 Strength saving throw or take 1d4 damage of a type determined randomly by the table below:

Chromatic Breath (Recharge 5-6). The wolf exhales a blast in a 15-foot cone. Each creature in that area must make a DC 13 Dexterity saving throw or take 18 (3d8) damage of a type determined randomly by the table below on a failed save, or half as much damage on a successful one.

A Rain Golem is an animated, elastic and human-shaped construction of water, rumored to have been brought to life by patiently collecting rain water into the carefully-crafted mesh.

The top of the rain golem’s mesh head is open in order to collect rainwater, and once the golem is complete, the mesh is removed but the form stays in-tact.

The rain golem is not an intelligent construct, so it relies on its strength, speed, and connection with water. It will try to knock strong combatants prone in a contest of strength, but if it is in combat with a creature who cannot be bested by strength, it will try to drown them with its Smother attack.

Languages understands the languages of its creator but cannot speak

Immutable Form. The golem is immune to any spell or effect that would alter its form.

Water Form. The golem can enter a hostile creature’s space and stop there. It can move through a space as narrow as 1 inch wide without squeezing.

Magic Resistance. The golem has advantage on saving throws against spells and other magical effects.

Freeze. If the golem takes cold damage, it partially freezes; its speed is reduced to 10 feet until the end of its next turn.

Slam. Melee Weapon Attack: +8 to hit, reach 10 ft., one target. Hit: 16 (2d10 +5) bludgeoning damage. If the target is a creature and is successfully hit by two slam attacks, it must succeed on a DC 13 Dexterity saving throw at the beginning of its next turn or fall prone by slipping under it’s forceful waters.

Smother. Melee Weapon Attack: +8 to hit, reach 15 ft., one Medium or smaller creature. Hit: The creature is grappled (escape DC 15). Until this grapple ends, the target is restrained and is suffocating via drowning. In addition, at the start of each of the target’s turns, the target takes 12 (2d6 +5) bludgeoning damage.

This shadowy, black ooze is a mysterious horror that can attach itself nearly invisibly to any non-liquid surface, laying in wait for a creature to terrorize with its necrotic strength-draining abilities. They jump on and attach to the face, covering the ears, eyes, nose and mouth of unwitting victim in order to suffocate them in permanent darkness.

The ooze will try to attach itself somewhere stealthy and out of sight - usually a wall or ceiling - and from there launch its initial attack. It will usually attack by extending elastically to bludgeon a creature and drain its strength, and then to jump and attach itself to a victim’s face to smother them after their strength is drained in order to prevent them from breaking the grapple.

Amorphous. The ooze can move through a space as narrow as 1 inch wide without squeezing.

Spider Climb. The ooze can climb difficult surfaces, including upside down on ceilings, without needing to make an ability check.

False Appearance. While the ooze remains motionless, is it indistinguishable from an oily puddle or the shadow of a nearby object.

Strength Drain. Melee Weapon Attack: +5 to hit, reach 15 ft., one target. Hit: 6 (1d6 + 3) bludgeoning damage plus 15 (2d10) necrotic damage and the target’s Strength score is reduced by 1d4. The target dies if this reduces its Strength score to 0. Otherwise, the reduction lasts until the target finishes a short or long rest.

Smother. Melee Weapon Attack: +5 to hit, reach 15 ft., one Medium or smaller creature. Hit: The creature is grappled (escape DC 13). Until this grapple ends, the target is blinded, restrained and is suffocating via drowning. In addition, at the start of each of the target’s turns, the target takes 15 (2d10) necrotic damage.

These are giant pack insects that are large enough to eat creatures of medium size or smaller whole. They have an unusual digestion process that can be brutally painful: a slow-burning, paralytic stomach acid, thin, breathable flesh, and internal stomach teeth that turn and rend its prey - over a period of about one month while they are alive inside.

They are known for taking turns amongst pack members, scavenging each corridor of a cavern, dungeon, or labyrinth of any sort and making a high-pitched howling noises.

They usually travel in packs of 3-7, and will attack any substantial food source on-sight. They will not attempt to howl for the rest of their pack unless they reach half of their hit points, as they want the food to themselves if possible.

Pack Tactics. The wolfworm has advantage on an attack roll against a creature if at least one of the wolfworm’s allies is within 5 feet of the creature and the ally isn’t incapacitated.

Keen Smell. The wolfworm has advantage on Wisdom (Perception) checks that rely on smell.

Acid Wad (Recharge 6). The wolfworm spits regurgitated stomach acid in a glob at one target within 5 feet of it. If the target is a creature, it must make a DC 13 Dexterity saving throw, taking 10 (3d6) acid damage on a failed save. Also on a failure, the target is paralyzed. The target must make a DC 13 Constitution saving throw at the end of each of its turns, ending the effect on itself on a success.

The durp snake appears like any ordinary snake, but it has been magically enhanced to contain a venom that reduces a creature to drooling, blubbering imbecile.

Bite. Melee Weapon Attack: +5 to hit, reach 5 ft., one target. Hit: 1 piercing damage, and the target must succeed on a DC 10 Intelligence saving throw, or taking 6 (2d4) psychic damage on a failed save, or half as much damage on a successful one. Also on a failure, roll 3d6: If the total equals or exceeds the target’s Intelligence score, that score is reduced to 0. The target is stunned until it regains at least one point of Intelligence.

If you love the content here at SporeServant.com, consider purchasing your D&D 5th Edition books using our Amazon Associate Partner links below! Thanks for reading and helping out with the costs of hosting!