Note: this post is part 2 (click here for part 1!) of a series which was inspired by the article “Dungeons and Dragons creatures, generated by neural network”, wherein a savvy artificial intelligence wizard Janelle Shane trained a neural network to come up with a slew of new creature names based on 2nd edition AD&D creature names. I found these names inspiring and decided to render these creations storied and statted - hence, this post. Enjoy - use in your game, modify as necessary, and please let me know in the comments if you love/hate/have recommendations :) cheers!

These rare Fey creatures are packed with abilities and lore that make them great as a plot focus for one-shot adventures. The Giant fraithwarp: a low CR legendary creature who acts as a gate to and from the Feywild; the walfablang (commonly mispronounced as “waffle-blong”): a mythical beast who throws darts with flare, and has an insatiable urge to be the recipient of your players’ magic baubles; and the burglestar: a dryad-like Fey who creates a symbiotic relationship with giant spiders and wants to feed your players to them! 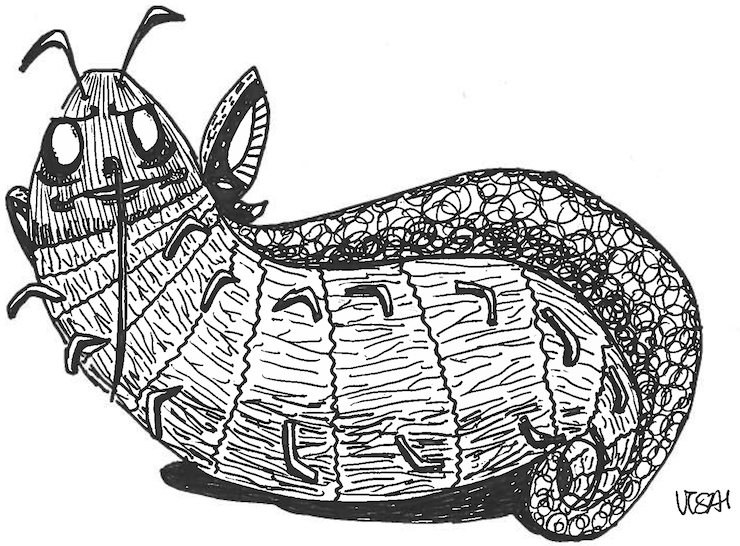 This giant, winged caterpillar is a woodland inhabitant that does its utmost not to be seen or heard by camouflaging into its woodland surroundings. Even more so, a fraithwarp will begin to make the woods around it more like the Feywild the longer it is there.

A fraithwarp, if stationed in one place long enough, can create a gate to the Feywild through which it can summon protectors, or, transport creatures to the Feywild.

It is most common to find them near Elven lands, as their primary function is to leave an open connection to the Feywild through which Fey creatures on other planes can return to defend the Feywild in times of need.

If a fraithwarp has not been making its nest in a location for a long time (greater than a month), it will attempt to detect whether the party is good, and if not, flee at the first sign of danger. If it can’t escape, it may use its Lair Action to summon some weak Fey creatures to help it make an escape, or teleport.

However, a fraithwarp who has been nesting in a location and has begun to open its gate to the Feywild will defend its nest at all costs. It will likely start off a fight by casting entangle, and then charge at the first creature to pass through the web. At the end of the turn of the first creature who hits it, it will cast Shimmering Shield (see Legendary Actions) on itself for protection. Depending on the number of attackers, it will use its Lair Action to summon one strong creature, or many weak creatures from the Feywild to protect it, and it will fight to the death.

Charge. If the fraithwarp moves at least 20 feet straight toward a target and then hits with its whip attack on the same turn, the target takes an extra 10 (2d8) bludgeoning damage. If the target is a creature, it must succeed on a DC 15 Strength saving throw or be knocked prone.

At will: detect evil and good, druidcraft, pass without trace

Magic Resistance. The fraithwarp has advantage on saving throws against spells or other magical effects.

Multiattack. The fraithwarp makes two attacks: one bite attack with its proboscis, and one whip with its antennae.

Healing Touch (3/Day). The fraithwarp touches another creature with its proboscis. The target magically regains 11 (2d8 + 2) hit points. In addition, the touch removes all diseases and neutralizes all poisons affecting the target.

Teleport (1/Day). The fraithwarp magically teleports itself and up to three willing creatures it can see within 5 feet of it, along with any equipment they are wearing or carrying, to a location the fraithwarp is familiar with, up to 1 mile away.

Shimmering Shield (Costs 2 Actions). The fraithwarp creates a shimmering, magical field around itself or another creature it can see within 60 feet of it. The target gains a +2 bonus to AC until the end of the fraithwarps next turn.

Conjure Fey. The fraithwarp casts Conjure Fey as a 6th level spell. Concentration is required for this spell.

Feywild Growth. The fraithwarp can cause the nature around its lair to grown and shrink at alarming speeds. 1d6 giant, malformed, bulbous roots can burst through the ground within 100 feet of the fraithwarp, straight up into the air, and falling to the ground again, targeting any creature in range (1 creature per root). The targets must make a DC 10 dexterity saving throw to dodge out of the way, or suffer 8 (2d6) bludgeoning damage. Any creature who rolls a 1 on their saving throw is knocked prone.

Pronounced commonly as “waffle-blong” (but actually pronounced, “wall-fa-blong”), these incredibly rare humanoid creatures are full of magical tricks, which they mostly use to get people to give them their belongings willingly. Very little is known of their origins or their deity, but many old elves have heard and can recall tales and lore about these creatures from their Fey ancestors.

Their god is good, and will not steal, but is also greedy, so Waflablangs must get these baubles willingly or risk falling out of the favor of their god.

If a walfablang does commit theft or an evil act to acquire these baubles and trinkets, their god turns them into a spirit and magically attaches them slightly out-of-reach - forever observing - to the bauble they stole.

A remove curse spell will release the walfablang from this state, but having been tormented, it will immediately attack and fight to the death to acquire the coveted treasure that doomed them.

Its curse removed, and having been abandoned by its god, it realizes it is cursed yet again: to live eternally on the material plane without a god to care for their spirit. A walfablang that remains on the material plane long enough will lead creatures like Goblins to do its bidding in exchange for teaching them small magic.

When this abandoned creature does die (it must be killed, or live forever), it is forced to roam the material plane as an invisible spirit eternally in observation of the alluring trinkets of the world - its god will not transport its spirit to the material plane.

A walfablang will usually prepare for a first round of battle by casting Bane, especially if it will fight more than one enemy.

If a walfablang has nearby allies (like goblins they have convinced to do their bidding), they will attempt to cast Enthrall to focus their enemies on them, and have their allies attack from the shadows. It may try to corner a single adventurer and cast modify memory on them during combat, and give them a memory of a quest-giver having sent them on a quest to deliver the magic item to the Walfablang - and then escape while his allies are mowed down!

If a walfablang is alone, it will do everything in its power to charm the enemy and convince them that they can be allies or friends - even offering to cast a spell for them, like Locate Object, or to mend broken items. When this doesn’t work, the Walfablang will attack. Fearing death, they may cast Expeditious Retreat to live another day.

A walfablang will use every magical facility and skill proficiency in their power to get a curious trinket, bauble, or magic item from the players.

Keen Sight and Smell. The walfablang has advantage on Wisdom (Perception) checks that rely on sight or smell.

Cunning Action. On each of its turns, walfablang the spy can use a bonus action to take the Dash, Disengage, or Hide action.

Rampage. When a walfablang reduces a creature to 0 hit points with a melee attack on its turn, the walfablang can take a bonus action to move up to half its speed and make a bite attack.

Innate Spellcasting. The walfablang’s innate spellcasting ability is Charisma (spell save DC 13). The Walfablang can innately cast the following spells, requiring no components:

At will: mending, minor illusion, prestidigitation

Claws. Melee Weapon Attack: +6 to hit, reach 5 ft., one creature. Hit: 8 (2d4 + 4) slashing damage and an additional 7 (1d10) force damage as their fresh wounds to throb with painful and mysterious magic of the Feywild.

Dart. Ranged Weapon Attack: +6 to hit, range 30/120 ft., one creature. Hit: 5 (1d4 + 4) piercing damage. The darts fired by a walfablang produce a tiny, mesmerizing illusory effect that makes them difficult to dodge. Roll a 1d6, and on a 6, the dart shoots harmless light and sparks in a variety of directions as a decoy. The target must make a DC 13 Wisdom saving throw or the attack is a hit, regardless of AC, and the target takes an additional 1d4 force damage. Anything lower than a 6, the dart produces a similar effect but it is not enough to provide a decoy. 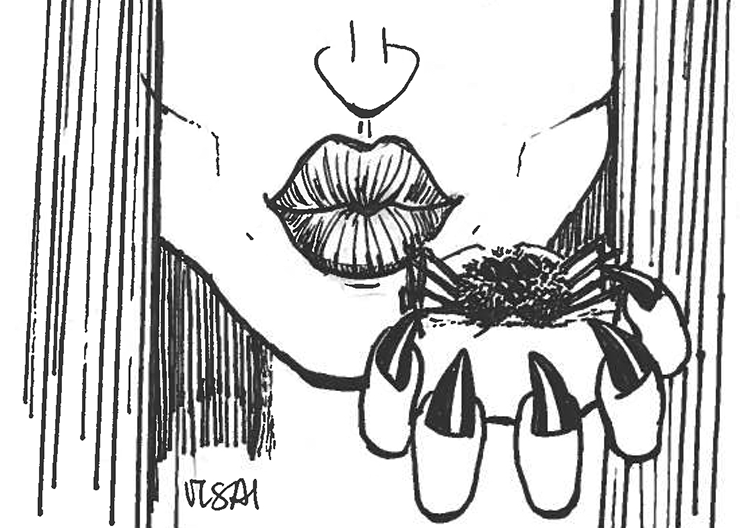 This creature is a nocturnal, tree-skinned humanoid (male or female form - can appear as either and switch between) that waits patiently in the woods to lure adventurers in as spider food.

Elven lore tells it that the burglestar are ancient Fey who long ago forged a bond with the Spider Queen Lolth to be protectors of her spiders on the surface world, as Lolth looked over the underworld.

Burglestars are usually found near and with giant spiders - around their webs - trying to lure insects - or better, adventurers - into the webs to be eaten by the spiders. The spiders provide protection for them, and they provide food for the spiders. A burglestar can create a bright, alluring light that can appear like a campfire from a distance, and alter their speaking voice to sound like a moving stream in the distance.

A burglestar will do its utmost to lure any adventuring party near to its spider companions’ webs. Once it can get them within 20 feet, it will cast web - enclosing the party in the web, while also connecting the magical web to the spiders’ natural web. Once the adventurers start wriggling, the spiders will come to finish the burglestar’s work.

When the burglestar first meets the party, it will put on a deception to appear in need of help, or as if it has found something to share with the party. Any adventurer who casts detect good or evil can tell that this creature is quite sinister. Additionally, an Insight contest against the burglestar’s Deception could reveal same.

If the burglestar is found out, it will cast web and run away.

Fey Ancestry. The burglestar has advantage on saving throws against being charmed, and magic can’t put the burglestar to sleep.

At will: dancing lights, druidcraft

Magic Resistance. The burglestar has advantage on saving throws against spells and other magical effects.

Speak with Beasts and Plants. The burglestar can communicate with beasts and plants as if they shared a language.

Bite. Melee Weapon Attack: +3 to hit, reach 5 ft., one target. Hit: 6 (1d8 + 1) piercing damage. If the target is a creature, they must make a DC 10 Constitution save or take an additional 12 (3d6) poison damage from the burglestars venomous fangs.

If you love the content here at SporeServant.com, consider purchasing your D&D 5th Edition books using our Amazon Associate Partner links below! Thanks for reading and helping out with the costs of hosting!